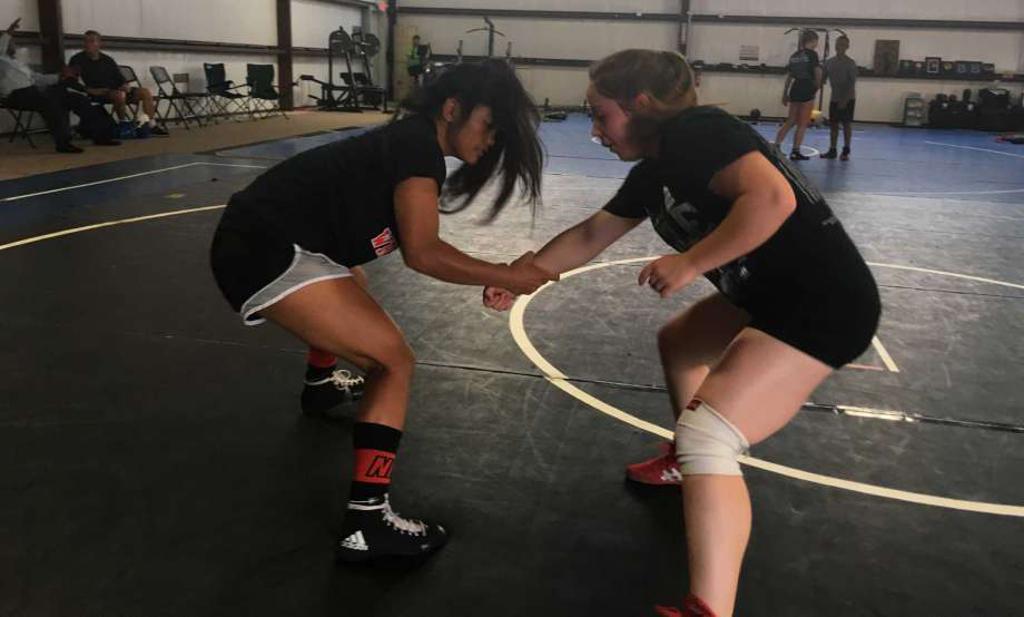 Madison Angelito (left) and Aspen Teeples practice freestyle wrestling at the NB Elite Wrestling gym. The club is one of the state's premier wrestling groups.

NEW BRAUNFELS — You might know this Comal County town because you’ve tubed the river here.

Perhaps you ate too much sausage during one of the extended accordion solos at Wurstfest.

Or maybe you were northbound and found yourself ambushed by the surprisingly heavy traffic in the nation’s second-fastest growing city.

But this Germanic utopia — where the Hühnerbrust Geschnetzeltes is served hot at the Alpine Haus Restaurant and Gruene Hall will always be cool — has a few moves about which you are clueless.

Those moves go down every night in a sweltering gym located on Texas Farm Road 482 near the Solms Nine Pin Bowling Club, where 50 to 70 kids from around the region get together to do some pinning of their own.

Quietly and consistently, NB Elite Wrestling has become a state powerhouse in the art of grappling. Every year, teens from the club earn a sizable share of state and national trophies.

In doing so, it has become one of the state epicenters in club wrestling, with a realistic chance of becoming a national contender.

In the last two weeks, NB Elite wrestlers competed in Pennsylvania, Indiana and Amarillo. In the next week or so, a small group of girls will head to Fargo, North Dakota, for another national meet.

“A lot of clubs compete locally,” said co-head coach Steve Horton, himself a Hall of Fame youth wrestler who still competes internationally. “We want to compete against the best because that’s what makes us better.”

In the club’s previous season, NB Elite produced 20 youth All-Americans, a top-ranked wrestler, three wrestlers ranked in the national top 10, a Texas wrestler of the year, and two Texas rookies of the year.

The club’s reputation goes back several years, said Troy Jewell, the club’s other head coach and a former high school wrestler in California. It was always successful, but when Jewell and Horton took over, it went to another level.

Based on the success and reputation of the coaches, the club now draws kids from San Antonio, Austin and beyond.

Troy Guerra, one of the club’s two award-winning rookies, took to the sport after giving it a try at a wrestling camp in San Antonio.

“He really liked it,” said Julian Guerra, the boy’s father. “I wrestled in high school in Germany (he comes from a military family). “So I checked around and found these guys.”

Wildly successful coaches tend to be over-the-top, which is a polite way of saying they’re screaming madmen.

“They see everything — wins, losses, whatever — as teachable moments,” Guerra said. “In nearly every picture I took of Coach Horton in Amarillo, he’s always got his arm around a different kid, talking to them about what just happened (during a match).”

Phillip Cosby, another parent with extensive wrestling experience, said the club must be doing something right because there are kids from high schools all over San Antonio who compete for the club.

“They must feel it’s worth the drive,” Cosby said.

His son DeShaun, 13, has been wrestling for seven years, but Cosby sees “leaps and bounds” of improvement since the boy started competing for NB Elite.

The club competes in both halves of the traditional wrestling calendar. The fall is reserved for folkstyle wrestling, which is what high schools and colleges practice. In the spring, the focus turns to Greco-Roman wrestling, where the action is from the waist up.

This year, Madison Angelito of Steele signed a letter of intent to wrestle for Cumberland University in Kentucky.

With that type of success, it’s only a matter of time before NB Elite gets a hold on national dominance.

NB Elite In The News